KONSTANTIN SOUKHOVETSKI RETURNS TO STAR AT THE MUSICAL FEAST! 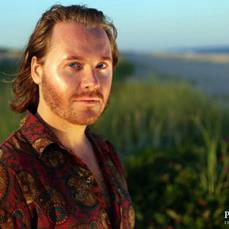 Were you there in the fall of October 2002 when a black-cloaked figure strode out onto the stage at First Presbyterian Church — whirled around, revealing a bright red lining — tossed the cloak onto the stage — then sat down at the keyboard and dazzled the HHSO audience with a brilliant rendition of Franz Liszt’s devilishly difficult Totentanz? If you were, you probably already have your tickets to the HHIPC’s benefit A Musical Feast, which we are happy to say is now sold out.

Russian born, Konstantin came to the United States in the late 90s

to attend The Juilliard School. While at Juilliard, his teacher Jerome Lowenthal suggested he apply to Pianofest in the Hamptons, a boutique summer festival for 12 top-tier pianists. He was accepted, loved the non-competitive atmosphere and being with other young musicians. Thus, he returned there the next six summers. The house in which they live has a Steinway grand in every room including the kitchen! The pianists practice, cook, play games, and hit the beach together, forming close personal friendships.

In 2011, he was asked to be the artist-in-residence at Pianofest where he came up with the innovative idea of filming the first-ever reality show about classical music. This show – “The Real Pianists of the Hamptons” — just completed its third season and is intended to show how classical music can be hip. Take a look at the show on YouTube or Facebook. We’re sure Konstantin will tell you more about it during the question and answer session.

As you can see, since winning the HHIPC in 2002, Konstantin has gone on to have an extremely varied career. Besides completing his artist diploma at The Juilliard School, performing, competing, and judging around the world, he has also acted in movies. He often talks about how he uses his acting skills while performing as a pianist. As he says, musicians need to remember it’s not about hitting every note perfectly but about touching someone’s heart. Some day he hopes to write a book about applying Stanislavsky acting techniques to performing music. Meanwhile, he’s been busy creating his own opera transcriptions much like Franz Liszt did. He’ll be performing some of those transcriptions at the Musical Feast for your enjoyment.

Be sure to also ask him about his shoes!

Host Families make a significant contribution to the Piano Competition as they create a home away from home for our competitors. Hosts are in contact with them before they arrive, pick them up at the airport, feed and house them for the length of the competition, and say a sad farewell when they depart. Such a close bond is formed during the time they are here that, for some of the competitors, it is like having a second set of parents. Certainly much work is required, but our hosts do it graciously and willingly.

The rewards are endless!

They revel in listening to beautiful music for a week, enjoy getting to know someone from a different culture and, in many cases, form lifelong friendships as you will see from Dot and Joe Maggi’s tales of this past summer (below). Like the Maggis, many HHIPC host families have housed competitors for a number of years and are presently looking forward to meeting their 2016 competitor. If you love music, want to support the Competition, and have a grand piano, why not consider hosting a pianist in the future? Please contact Peggy Ashworth at [email protected] or Barbara Holmes at [email protected]

STAYING CONNECTED WITH THEIR COMPETITOR – DOT AND JO MAGGI

When asked about their experiences over the past ten years as an HHIPC Host Family, Dot was so enthusiastic that we would like to share a few of them. Dot first found out about the program when a competitor came to play as a school ambassador at M.C. Riley where she taught music. “How can we host?” was her immediate reaction. Joe was an easy sell and the two of them have never looked back. They love the music, enjoy the interaction with young people from different cultures, and want to support the Arts in the community. 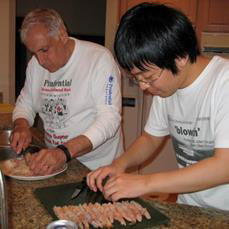 Their third competitor Takashi Yamamoto wowed them when he cooked an “incredible tempura dinner” for them one evening. They took photos and notes while he cooked so they could replicate it on their own. Imagine their surprise and delight two weeks after Takashi returned to Japan to find a box on their porch from his mother. It contained all the ingredients necessary to make Takashi’s dinner!

This past summer, the Maggis reconnected once again with their “boys” in Europe – Leonardo Colafelice (2013 First Prize winner from Italy) and Vladimir Milosevic (2009 Competitor from Serbia). By the way, both young men have returned to Hilton Head to visit the Maggis; Vladimir in May 2014 after he performed with the New York Concert Artists Orchestra in NYC and Leonardo this past June before going to the Southeast Piano Festival as a guest artist and then on to perform in Chile. 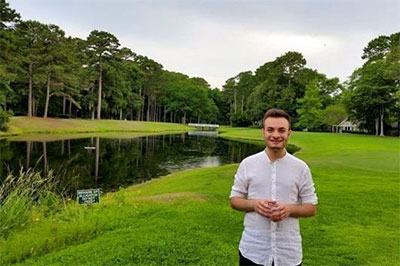 Leonardo at the Cypress in June before a recital. He was particularly moved by the comment of a 92 year-old woman who told him he had given her one of the most beautiful hours of her life.

Here are just a few photographic highlights from the Maggi’s 2015 summer: 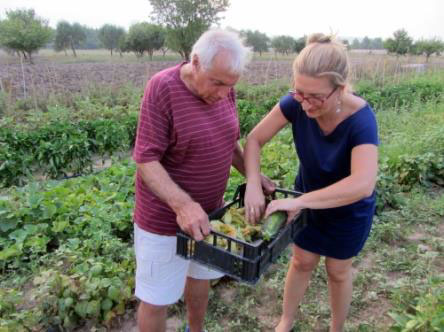 Joe picking zucchini flowers on the Colafelice farm with Leonardo’s mother who is a bassoonist like Dot. 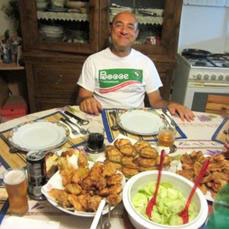 Fulvio Colafelice with dinner prepared and ready for the entire family to feast on their own produce. Fulvio has not only helped Joe try to locate his Italian ancestors but also spends much time helping Dot learn Italian. Dot is also a pen pal with Leonardo’s grandmother- they correspond in Italian!!! 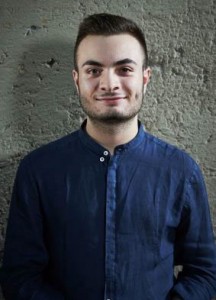 Leonardo was busy this summer practicing for the Busoni International Piano Competition where he was one of 6 finalists. He was also a finalist and winner of three special awards at the 2014 Arthur Rubinstein International Competition. 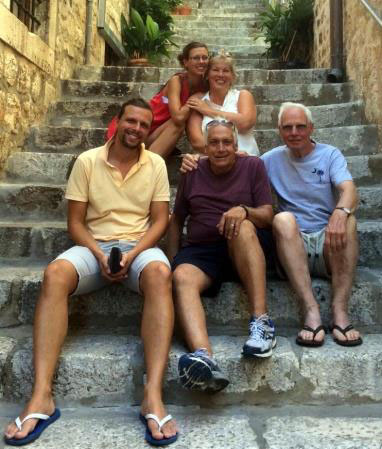 Then it was on to Croatia where the Maggis met up with Vladimir, his sister and father. They all spent time together touring in Croatia and Montenegro for several days. 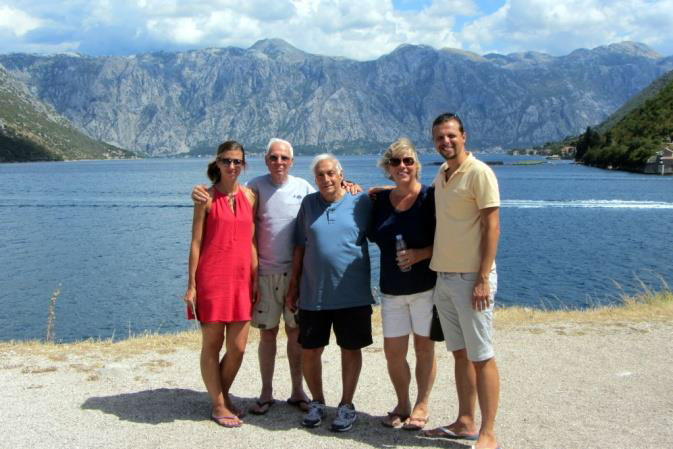 Vladimir currently is not only performing in Europe as a soloist and chamber musician but also teaching at the Faculty of Music Arts in Belgrade. 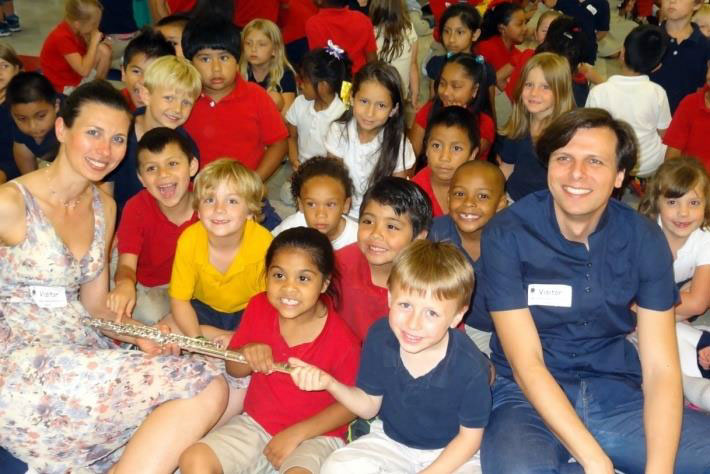 Back when Vladimir and his flutist sister Katarina visited the Maggis, he played for both the Italian American Club and M.C. Riley School.

Dot and Joe have lots of other stories and would be happy to share them with anyone thinking about hosting a competitor in the future. Also, they’d love to share their experiences with any new host families for 2016. They have hosted both the younger and older pianists and will tell you that while it consists of two different experiences, both are rewarding. One just has to be ready for whatever arises– from providing a shoulder for them to cry on or hemming a skirt half an hour before a performance! The Maggis can be reached at [email protected]

SEE WHAT SOME OF OUR FORMER COMPETITORS ARE UP TO! 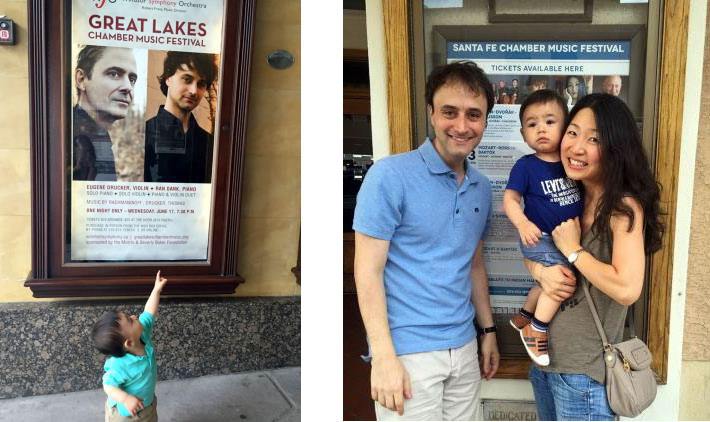 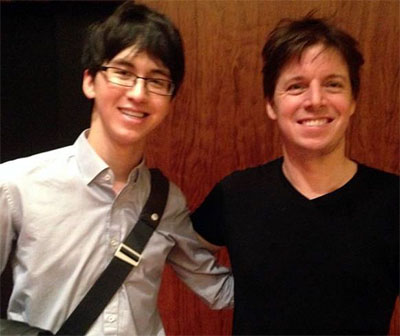 HHIPC YOUNG ARTISTS – WHERE ARE THEY NOW? 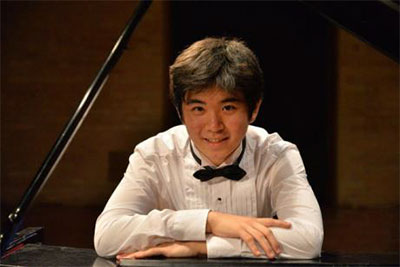 Like so many of the young artists who have competed in Hilton Head, Tony Yike Yang is truly making a name for himself in the musical world. Just 14 when he won Third Prize in the 2013 HHIPC for Young Artists, he has continued competing and now winning at both the junior and senior level.

In 2014 he won the Thomas and Evon Cooper International Piano Competition which awarded him $10,000 and a full four-year scholarship to the Oberlin Conservatory of Music. As the youngest competitor ever, Tony also won Second Prize at the 2014 Canadian Chopin Competition plus the prize for the best performance of mazurkas.

Like most teenagers, Tony enjoys hanging out with his friends, playing video games and going to movies. Few of them though have had the opportunity, like Tony has had, to play for Camilla, the Duchess of Cornwall! We wish him well as he continues to compete and perform all over the world and in his studies at the pre-college division of The Juilliard School under the tutelage of Julian Martin. Take a look at some of his YouTube videos. You will be amazed at the musicianship of this young pianist!

EVELYN MO – Competing at High Levels and Active in Music, Science and Writing 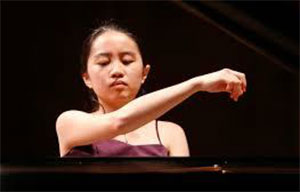 When she competed at the 2013 HHIPC for Young Artists,

Evelyn was a high school freshman at the acclaimed Thomas Jefferson High School for Science and Technology in Alexandria, Virginia. Now entering her senior year and busy applying to music schools and colleges which grant joint degrees, she is also studying piano under the tutelage of former HHIPC Jury Chair John O’Conor.

Evelyn continues to compete at a high level in piano competitions for young artists. In 2014 she won First Prize in the David D. Dubois International Competition, a scholarship

from the National US Chopin Foundation, and was the youngest prizewinner in the 14th Ettlingen International Competition for Young Artists. She recently won a National NFAA YoungArts award for piano.

The past three years, she has been invited to perform solo recitals in the “Meet the Artist” series at George Mason University. She has also played with several orchestras including the Rochester Philharmonic.

Even with her busy scholastic and piano practice schedule, she still finds time to be the Concertmaster of the American Youth Philharmonic Orchestra; works on the yearbook; is a published poet; and is Vice-President of the Tomorrow’s Women in Science and Technology Club at TJ. You might as easily find her helping middle and elementary school students get involved in science as at the keyboard. Kudos to Evelyn for all her accomplishments!